We commenced our Sound Ways journey in April 2014 with the pre testing of all of our students. At the time we had 20 Indigenous students split between 2 groups.

Myself and my co trainer were really excited to implement the new program and hoped it was going to live up to the high expectations we had placed upon it. We diligently watched the training DVD's and took on the challenge of presenting The Sound Way with a positive and optimistic attitude.

It took a couple of weeks for our students to get used to watching and listening to a new teacher on the big screen and one student even asked me ???If he could really hear us??? as Craig would often pre-empt some of our questions. At this time we stopped all of our other Literacy and Numeracy Training to focus only on The Sound Way. Within a month The Sound Way lessons had become our new routine, students knew what was going to happen and what was expected of them each lesson. As the lessons gradually progressed and became more challenging, so was their confidence also growing, and the sounds were starting to make more sense.

On average we completed 2 lessons a week and struggled at times to fit in the sentence construction as our lessons were only 2 hours per session with a small break. Sometimes we would allocate catch up weeks where people who had missed a lesson could work through those lessons individually on a computer. We were able to progress most people through to around lesson 30 before commencing the revision lessons.

Highlights of the Program

After completing The Sound Way program we have noticed a significant improvement in our Indigenous employees - confidence and willingness to read aloud and write things unassisted. We completed pre and post testing with 14 of our students, who on average improved 2.3 years in their spelling ability.

The program has met all our expectations and we will continue to run The Sound Way program as part of our Literacy and Numeracy training with Indigenous employees. Through delivering the Sound Way program we ourselves have learnt a lot and thank Craig for his support; especially for taking the time out and visiting us here on Groote Eylandt. 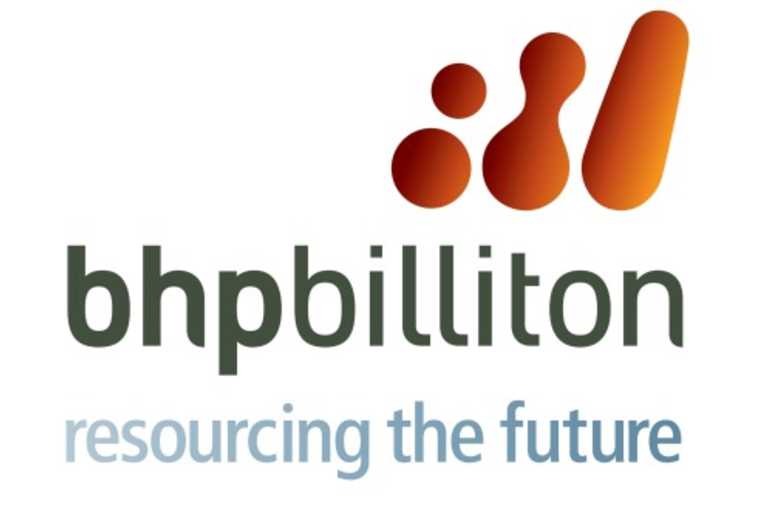 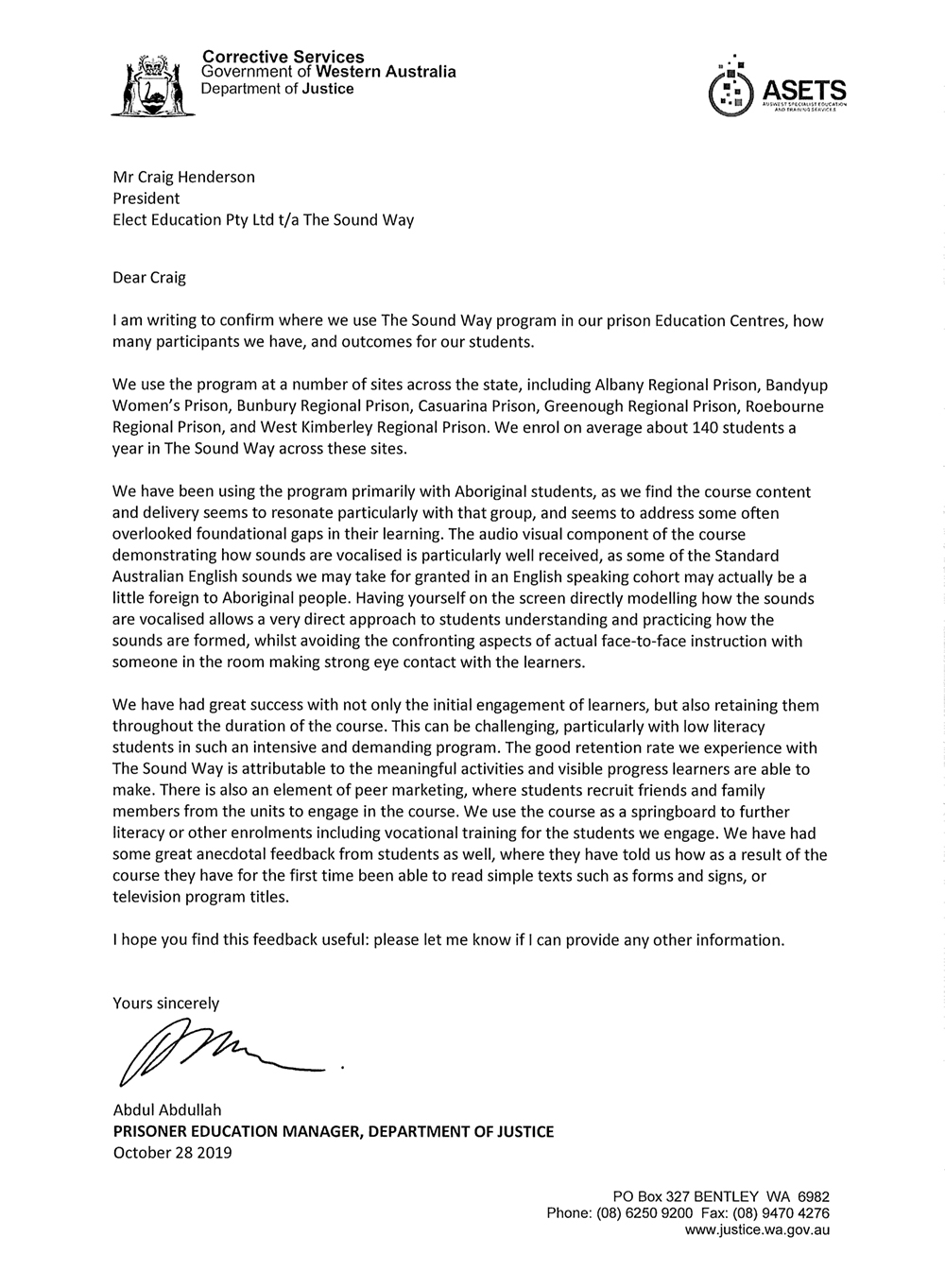 "I presented The Sound Way program to 25 indigenous Australians on behalf of Pilbara Iron (Rio Tinto) at Tom Price in the northwest of Western Australia. Participants ages ranged from 16 years to 54 years. You can see below that I have completed the final scoring as requested.

I would like to mention that this program has been a great pleasure to present in itself; not to mention the satisfaction one gets from not only helping others, but also seeing them progress so quickly. Several of the students have commented on how easy the classes have been to learn and wished it had been available to them earlier in their lives. Many have said they would like it to be available to their families.

One can easily see from the Score Sheet below, the success of this class. Some students improved up to 5 years in their reading ability in just six weeks. The average overall student improvement was 3.5 years in six weeks.

The Sound Way program has given them self-esteem, pride, motivation, courage, and the confidence to seek employment. They have also commented on how nice it is for them to be able to do simple things that you and I may take for granted, such as being able to read the news paper, or read notes or flyers sent home with their children from school.

As you can see in the Score Sheet above, there were only a few students that didn't finish the course for varying reasons, and some that scored much higher than others. I feel this was due to the level of effort they themselves put in. I strongly believe that the class was a huge overall success." 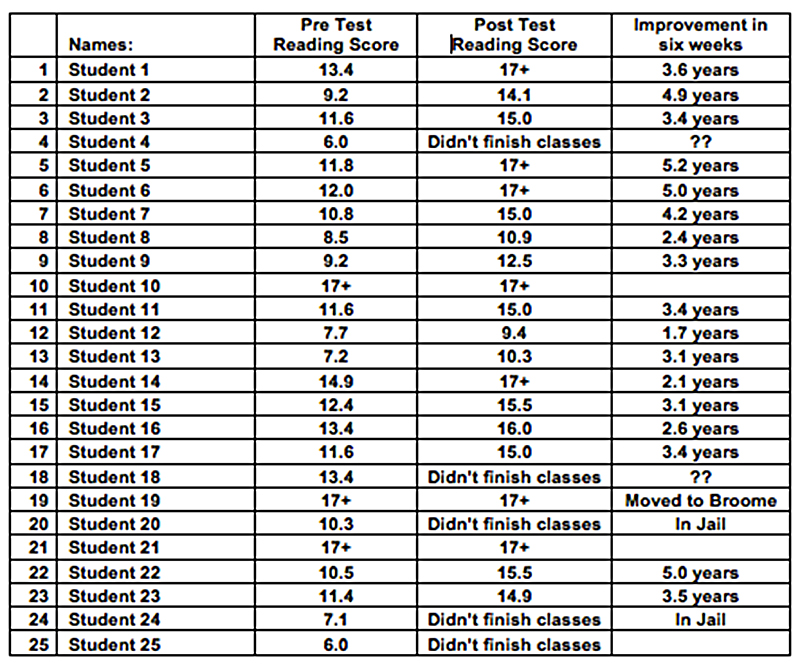 "Eric Rives, a big, burly Californian from Manteca in the verdant San Joaquin Valley, is a long way from his roots in dusty Tom Price in the Pilbara where he is working on the Community Development Employment Project (CDEP).

In fact, Eric first came to Tom Price as a site manager for a major building contract at Pilbara Iron.

Says Eric, "Managing the project I noticed that we were unable to retain Indigenous labor. Many of our Aboriginal workers could scarcely read the safety notices, which meant they were putting themselves and other people in danger. What was worse, some people were dismissive and disrespectful towards them, implying it was their own fault. So, on the basis that you can't blame them if you don't train them, I began to get interested in Aboriginal education."

That is how Eric came to be working on and facilitating Elect Education's, "The Sound Way to Reading, Writing, and Spelling" program - a literacy program being piloted by Pilbara Iron together with CDEP.

Using an integrated spelling, writing and reading course comprising both teaching DVDs and well laid out manuals, Eric is facilitating a workshop at the Tom Price CDEP.

The classroom, with about 25 students ranging from teenagers to some who are middle-aged, pulses with energy. Susan is writing a sentence from the workbook."I love the way I make my letter b", she says.

Alma, a 54 year old Yindjibarndi woman says, "I left school at 13 and didn't get much learning in reading and writing. But this is way easier than it was at school."

Alma has been attending Elect Education's, The Sound Way since its inception and is enthusiastic about the program's benefits. "You don't see Aboriginals in the high jobs," she says seriously, "so we have to learn how to write and read and pronounce things properly."

"That kind of positive attitude and motivation is very common in the program," observes Eric.

"The Sound Way results so far have been really impressive. Eight out of 11 of our students have been accepted by Pilbara Iron and have sailed through their induction programmes. Now they are being trained on the job: bobcats; front end loaders; backhoes... you name it."

Eric laughs. "I may be a long way from home, and certainly I could be earning far more if I went back to site management, but, doing what I'm doing here - I really get a buzz. I think I've found my niche."" 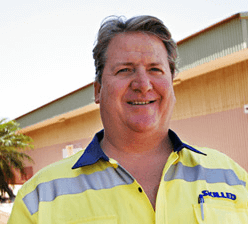 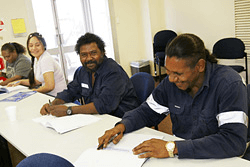 TIWI ISLANDS TRAINING AND EMPLOYMENT BOARD

"To whom it may concern,I am writing this letter to anyone who may be in a position to help give our kids a real chance to succeed in life. I have been a teacher, Principal and Vocational Education Trainer for 20 years, working with indigenous students from around the Northern Territory and the Tiwi Islands in particular.

At Nguiu on the Tiwi Islands, we have almost exclusively based our educational curriculum on the whole language concept for the past 20 years with devastating results. For twenty years we have been delivering 80% illiterate students into the Tiwi work force which has resulted in high levels of unemployment in an economic climate where there are real employment opportunities.

This surely can not be acceptable or possible in the year 2007. Yet it remains so.

Teaching people to read and write is not brain surgery. It is possible and it is achievable in a relatively short space of time. The Sound Way program is THE answer.

As co-principal of Xavier Community Education Centre in 2003 we implemented The Sound Way program. Within three months we had 15 year old students who were unable to literally spell ‘cat' able to read and write at a higher level than ever thought possible. We had students who could read only 20 out of 200 words all of a sudden able to read 150 words.

The pride, the self esteem and the willingness to start to explore career options were all born from the knowledge that they really can learn to read.

Make no mistake The Sound Way is THE answer. All we need is the people in positions of responsibility to take it on board, have a look at what it can do and get it into the schools.

It is as clear to me as the day is long that this is the program that can and will change the face of indigenous education and communities Australia wide.

Please don't muck around any longer. No more arguing about the merits of Whole Language and phonics. Too many lives have literally already been lost . There are real opportunities in many indigenous communities and The Sound Way WILL give indigenous people the tools, the confidence and the power to access these opportunities."